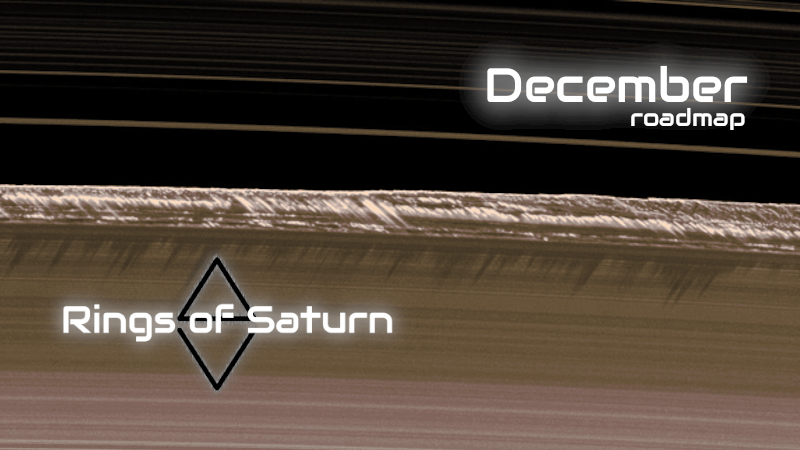 December marks the beginning of a new month with a new focus; but it also marks the last phases of development before we reach version 1.0, closing up all loose threads, completing all the game mechanics and getting something that can be called ‘complete’. We still have a way to go, and I doubt we will be able to wrap it up in 2019, but I’m confident we are just a few months away.

We leave November with new events, such as the Phage-class in-ring refueling station, with new crew system and crew capabilities. Our instruments were refined, Enceladus itself got an overhaul… In total we added 85 new features and polished up 77 details.

And bugs, so many bugs. Over 109 bugs have been reported and fixed. Our diligent community has helped out, submitting logs and savegames that exhibit unusual behavior as a starting point for tracking them down.

Story
December is story month. This is where I begin taking the universe I’ve created into something that lives, breathes, and changes. You’ve already seen many discreet story events in the game, but this is where we begin building real story arcs, events that proceed from events. At the time I’m writing this we have roughly 4 hours of the storyline in, and I want to expand it over to at least 10.

New Ships
No doubt you’ve noticed that our favorite K37 is not the only ship maneuvering the rings. You’ve seen the Search-and-Rescue CERF and the sleek Eagle Prospector plying the rings, but there’s more in the rings, and you’ll begin to see some of these. Some of these will be other professionals, working the rings just like you.

Others will be more mysterious, both dangerous and secretive. Along with new stories being implemented, you’ll see new players in the rings, some of whom may not appreciate the interest you take in their activities.

Ship Dealer
Of course, there’s no cosmic law that you can’t command an Eagle Prospector, or one of the other working vessels plying the rings. We’ll be opening a ship dealership, allowing the player to get behind the helm of various and varied craft.

Each ship is not simply a better K37, though. Each ship will have its own unique mass balance, its own unique technologies and interfaces, its own unique handling and thrust configurations. The unique designs, under-the-hood instrumentation, and the physics that influence each ship’s handling will change the personality of each ship on a more fundamental level than changing a value for hit points or increasing a mass value by ten percent.

The Little Things
As usual, a hundred little details will shift. Improvement and bug fixes will continue, and with the help of a vibrant community, we’ll do all the polishing needed to proudly call the game complete. We will continue to keep the rapid release cycle, so you can still expect to see multiple releases each week in the experimental branch – and few well-tested stable ones as well.